Formed in 1992 HOBSON’S CHOICE have been a distinct progressive rock band hailing from New Orleans, US. During their existence they could release one album named New Horizon in 1996. Now the real sensation, simply a surprise for most of us … October 2022 then saw the arrival of a sophomore one, appropriately entitled In Case Of Second Sight. The formal recording phase regarding this song material already had began in the fall of 1999. But it all remained unmixed and unreleased till now, for what reason ever. We will experience nearly the same line up again three years later, consisting of Richard Bird (guitars, vocals), David Stocker (keyboards, vocals), Joel Webb (bass) and Tom Larson (drums), enhanced with some additional collaborators anyhow. 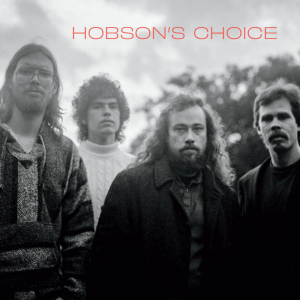 Nine songs have made it on this sophisticated production, yet again a wonderful string of pearls. In total they are having more than one hour of music in supply here. The band’s output is mostly symphonic and art rock tinged, moreover provided with a rather tricky eclectic approach. Along with their debut in the same way this generally features a proper 1970’s vintage styled atmosphere. Influences deriving from diverse genre defining groups like Genesis, Yes, King Crimson and Pink Floyd are occasionally shimmering through, who wonders? But it’s quite an unique presentation anyhow. Richard Bird and David Stocker both are providing fine lead vocals, where one of them is getting close to John Wetton or Greg Lake in expression, at best to recognize on the song Entropic.

In Case Of Second Sight consists of stunning compositions all the way through. And the musicians’ virtuoso playing marks a mesmerizing statement too. This goes for the entire album, without restriction, not always taken for granted in these days. Especially the atmospheric song couple Exile and Last Horizon convinces me with its sheer beauty. Regarding the closing track Endeavour they are giving pace again. Anyhow, just like it is with the other songs, for the sake of variation, or maybe even contradiction, the music is unveiling a flow like coming from a surprise bag in general. Not to believe, if this treasure would have remained in hibernation, hidden forever and ever? But luckily it all turned for good in 2022, easily to be checked out on their bandcamp page! (Uwe Zickel)